Are you struggling to decide whether to castrate your puppy? We debated long and hard and finally decided it as the right decision for us. Here’s what we learned through the process.

To castrate or not to castrate, that is the question!

This is a personal decision and not an easy one to make. The more people you talk to about the issue the more opinions and reasons for or against it you will hear. Castration or spaying means putting your gorgeous puppy through an unnecessary surgical procedure so it’s not a decision we took lightly.

Ultimately, we decided it was right for us for two reasons. The first is I’ve realised by walking Digby in lots of different places just how many unsocialised and potentially aggressive dogs there are out there. I think that if you have an entire dog full of hormones and you meet another entire male dog there is a real risk of violence as they compete for dominance. My dog is not aggressive at all, but I think he would defend himself and the thought of him being involved in a fight terrifies me.

The second reason is the only issue we have with Digby currently is recall. If there is another dog or human in sight, he rushes off to say hello. We’re hyper vigilant and aim to get him back on his lead before he spots anyone approaching, which works most of the time. However, I’m sure if he was entire and caught a whiff of a sexy entire female, we wouldn’t see him for dust!

Coping with the procedure

Decision made, we booked him in for castration with our lovely vet. Pet insurance doesn’t usually cover castration or spaying but luckily, we were able to cover the costs ourselves. If you are not so lucky you could investigate the PDSA or Blue Cross to see if they could help you.

Obeying the vet’s instructions, he hadn’t eaten that morning and enthusiastically greeted the vet nurses.

Little did he know!

I must say I felt awful leaving him there, and spent a fretful day waiting for the call to tell me I could pick him up. All had gone well with the small operation and then I made my first mistake.

We were given the option of the ‘lampshade’ or ‘Elizabethan collar’ to stop him licking the wound, or a medical baby gro type suit. I opted for the suit thinking the collar would be awful to wear and the suit would be easier for him to cope with. We had to up popper him when we took him out to wee and keep him quiet for a few days. We could only walk him on the lead and had to make sure he didn’t jump up on anything or go up or down stairs.

All seemed to be going fairly well, but we couldn’t stop him licking the suit over the wound. On day three he seemed listless and not well at all. We took him back to the vets for his post op check up the next day only to be told he had an infection.

We had valiantly monitored him as much as we could, washed the suit more than once a day and ironed it dry as quickly as possible, but it was no use. The licking had infected the wound.

A course of antibiotics was prescribed and the Elizabethan collar put on. 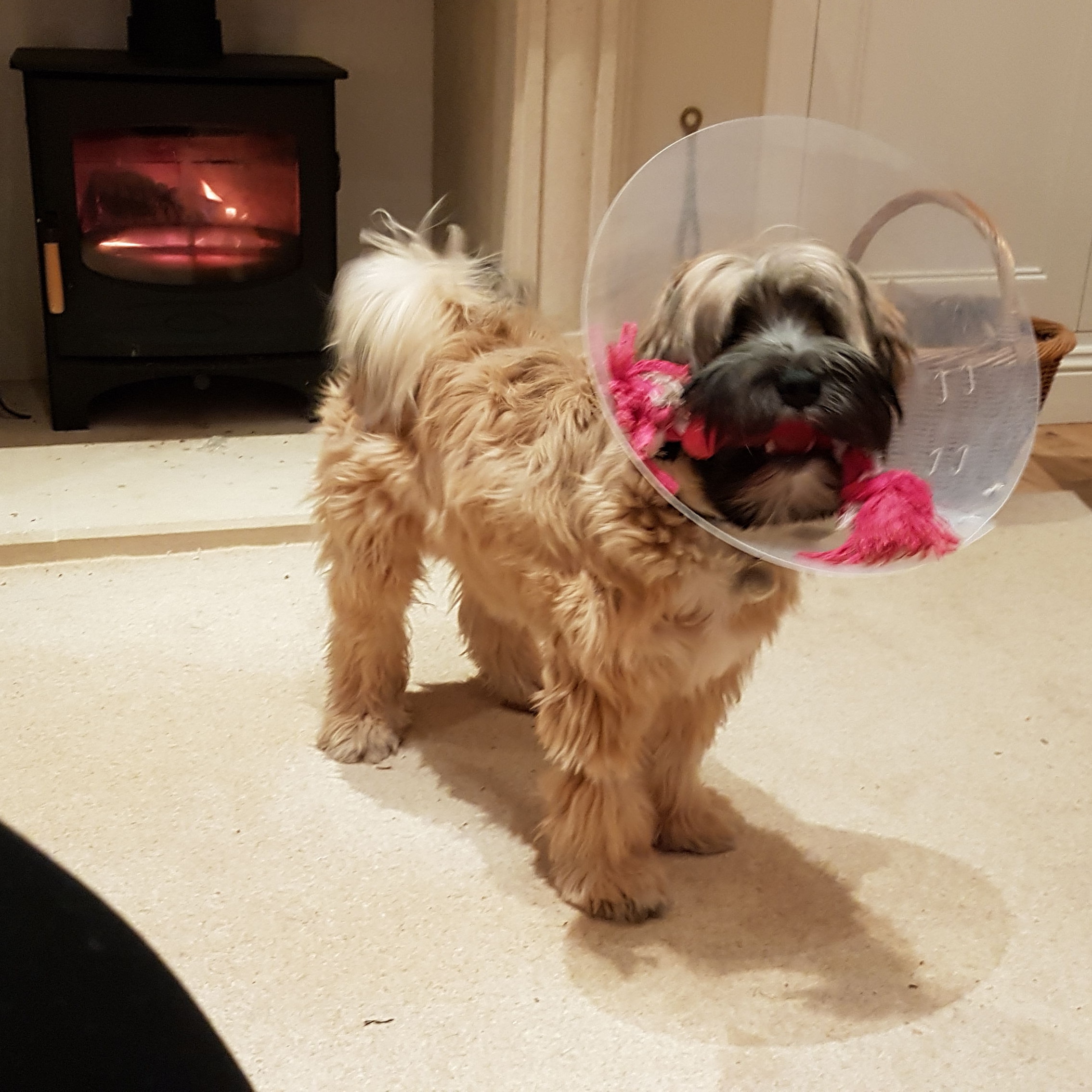 Despite my best efforts he had ended up in the collar after all! He coped really well and adapted to the collar within a few hours, but I can’t say he was happy about it.

The wound then healed well as he couldn’t reach it, and the collar came off about ten days later.

In future, if Digby needs any sort of surgical procedure, he will wear the collar to prevent him licking a wound. I’m sure the medical suit works well for some dogs, but not for us. I think perhaps the lack of air circulation is not great for the healing process but if you do try it, I would advise you to buy at least two suits so you can change, wash and dry it and have a better chance of keeping a wound clean.

Digby is now fully recovered and back to his usual happy, comical, loving self. While he was unwell training took a bit of a back seat, but work put in before the operation was time well spent as we’re picking up where we left off.

The only on-going issue is the hair matts the collar has caused on the backs of his ears and under his chin, but he’s off to the groomer in a few days’ time, so we’ll get that sorted out!

Every day is a school day with a new puppy but we’re loving every minute of it and learning as we go.  If you’re embarking on a similar journey with a new pet, have fun and don’t forget the pet insurance, just in case! Spaying and castration operations aren’t usually covered by pet insurance but going through this experience and needing extra antibiotics and support showed us just how quickly vet costs can mount up. That’s why we feel everyone should invest in pet insurance, so every pet can get the vet care they need, when they need it.

What we can't help you with

Pet Insurance Review is designed to be a community where pet owners can learn and share.

The views expressed across the blog are the opinion of the author and not necessarily endorsed by Pet Insurance Review. Always consult your veterinarian for professional advice.

We are not able to answer questions on existing pet insurance policies.

Happy Christmas from everyone at Pet Insurance Review!

What’s amazing about owning a dog?

Tour around the new site